Several weeks ago I had a request from a friend to make a custom totem using pictures of her 1 dog and 4 cats.  How could I not take that on!  It turned out really well and I am quite proud of my attempts at realistic animal representations.

After some back and forth, she and her husband decided they wanted this piece to be a wall hanging.  So, I mounted it on some of the reclaimed fence boards I have and bound them with 2 pieces of driftwood and silvered wire.  The effect is contemporary-rustic.  I love it, and most importantly, so did they!

These are the photographs my friend emailed to me.  She lined them up just how she wanted them to be on the totem.

This is the finished totem. 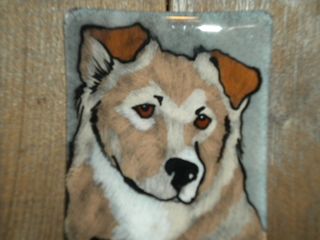 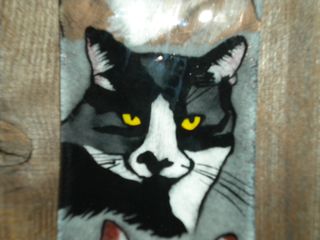 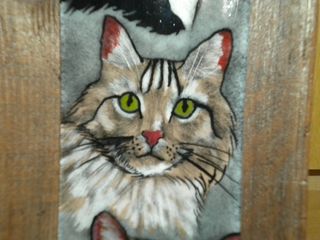 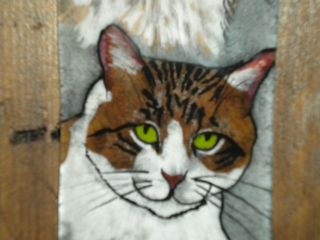 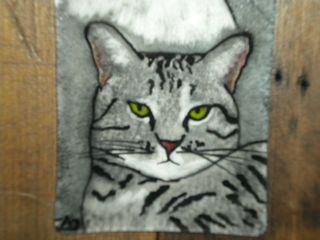 These are not the first pets I have painted, but it has seriously got me thinking about creating a way for people to order their own custom pet totems online and from my space at the Mountain Arts Gallery Coop.  I have already designed a flier page, but want to make a display piece using my animals to show what can be done.  I really think they are unique and hope that others will feel the same way.

They can be made as a memorial or just a fun way to show your love for your furry (or not) family members.  I have friends who include a lizard as one of their pets, dying to try out that totem - two dogs, a cat and a lizard (or iguana maybe).  Fun!

So, I wanted to make a totem with animal spirits that I hadn't tackled yet.  Up came a spider, a squirrel and a wolf.  Having a very tall, narrow piece of wood just begging for a totem, I ended up choosing a total of 5 animals for this totem. 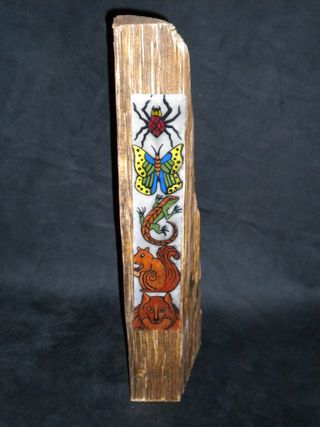 I call this my truth and reality totem because these animals all, in some way, symbolize our need to seek, find and use the truth in our realities.

The spider is the weaver of reality, the butterfly is a representation of one's ability to transform our truths into reality, the lizard teaches us to respect and remember our dreams (our subconcious realities), the squirrel affects our lives by encouraging us to seek and gather positive beliefs on which to lay our reality and the wolf is the discoverer of the truth. 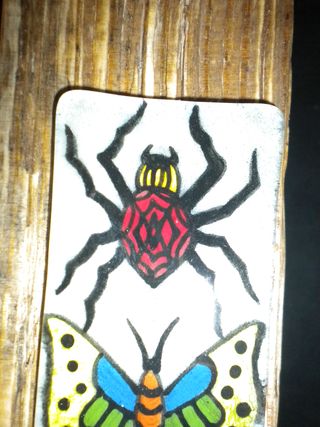 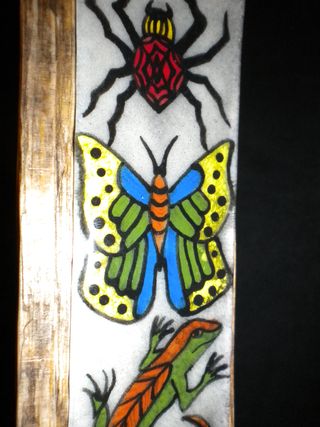 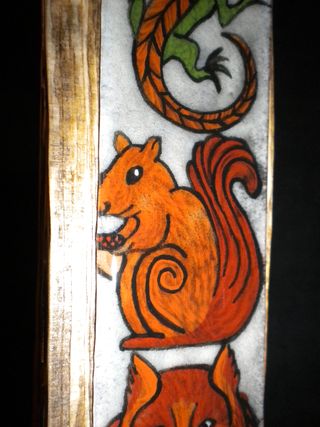 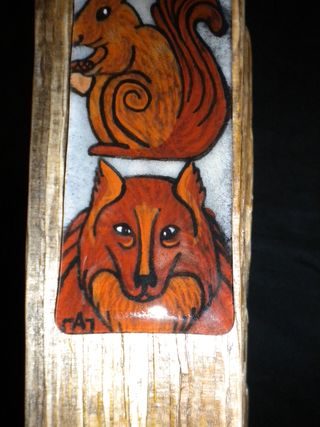 The totem is approximately 16" tall, 3 x 6" at the base and 3 x 2" at the top.  I always create a sheet with the meanings of each animal especially for each totem.

If you are interested in a custom totem or any of the totems I have shown on my blog, let me know, I am always happy to sell online and ship to you.

Totem animals are quickly becoming one of my favorite things to paint.  There are so many combinations of meanings and ways to balance the totems with representations, animal shapes, colors, etc.  Each one is completely unique and can be very personal. 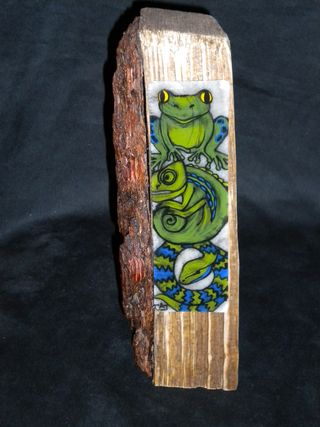 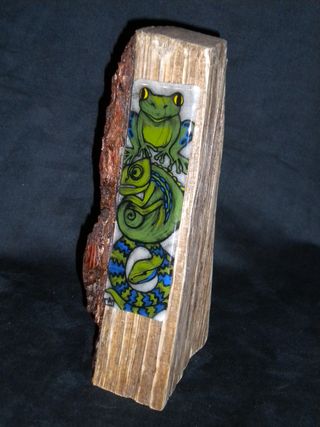 I chose to make all 3 animals with just 2 colors, green and blue.  They are very harmonious colors and, again, are meant to calm the viewer so they may "see" the way to a healthier way of life. 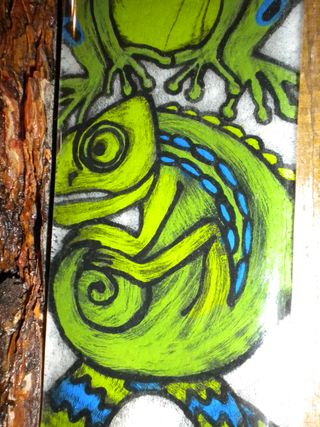 Next up.... the Truth & Reality Totem.   Hmmm, what animals spirits will it hold??

I have been working on Animal Totems and got 3 new pieces finished this week.  I chose the animals for each one to work together for a specific meaning.

The Hummingbird brings Joy and happiness to all who see and admire him.  He simply spreads his wings and quietly we rejoice - in nature, in happiness, in ourselves, in others.

The Eagle represents the Spirit and courageousness in all of us.  He is stately and regal and has an unending desire to face the fear of the unknown.

So, I present to you:
Spirit and Joy 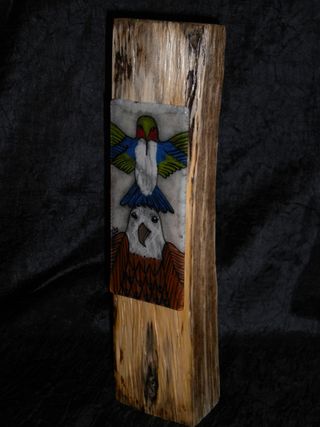 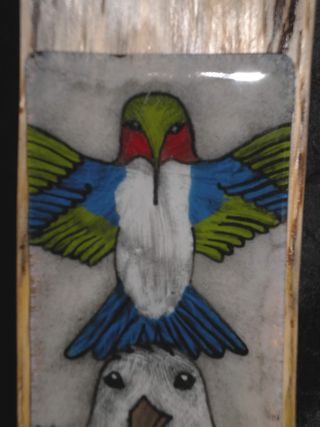 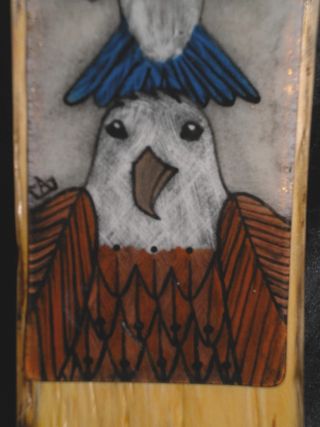 I was so excited to receive my bronze clay last week.  I got right to it and made up several mounting pieces for my painted glass.  I have learned a lot about the clay and have come out with some very appealing pieces.  Some of the construction didn't go as planned and the shrinkage was a hair more than I expected, but I am very happy with the results.

My bird this week is my Owl Totem Pendant.  He is done in a folk-artsy style and has an olive greenish background.  He is intended to bring knowledge and wisdom to you as you wear him close to your heart. 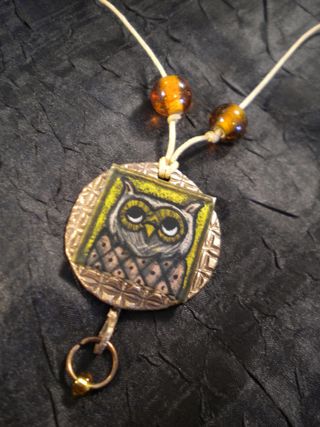 As well, I have finished an additional 10 other pieces with the bronze and glass.  I have them all listed on my Etsy site now available for sale.   Each one is made from an original reverse glass painting mounted on my handmade bronze clay.  Here are some preview pictures. 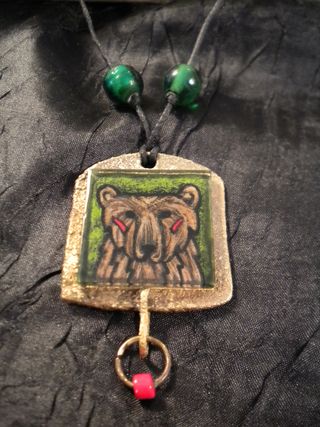 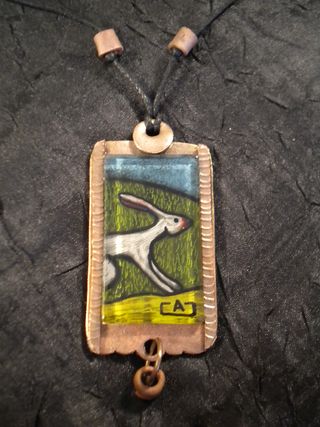 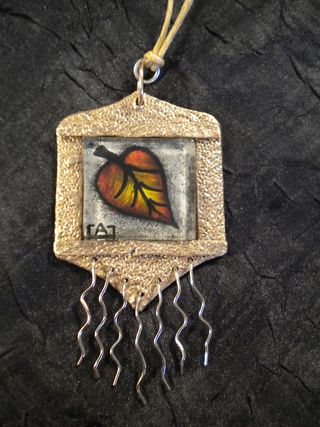 I actually have a dozen more glass pieces that need mountings, so more bronze work to come.  I love the warm tone that the bronze brings to the glass, it seems to work well with my images and themes.

Hope you also enjoy them!

My beautiful niece turned 18 last week.  She is about to go onward and upward.  I wanted to give her a gift from the heart that had meaning for her and for me.  So, I created an animal totem just for her. 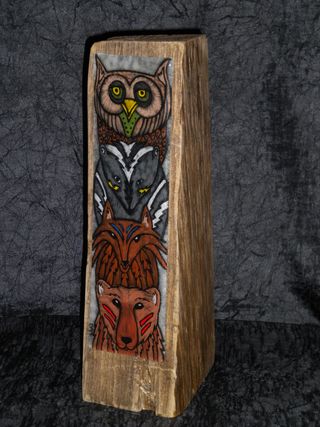 This totem has an Owl for Wisdom, a Skunk for Self-respect, a Fox for Creating your own Future and a Bear for Introspection.  I know that she can and will live up to the values of each life form represented.

I had so much fun creating each animal and building this special totem.  I can see how very personal and creative these can be. 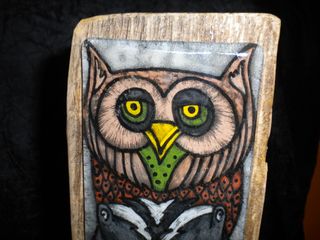 The Owl brings us Wisdom and teaches us to see what others may miss. 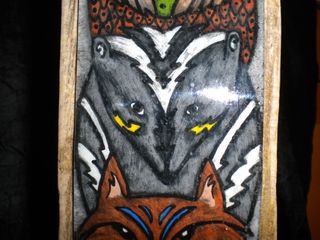 The Skunk exudes a wonderful Self Respect and shows us to be proud of who we are - no matter what. 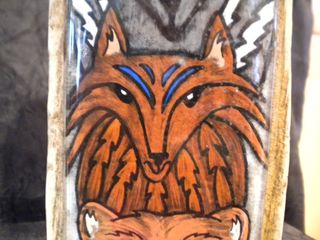 The Fox reminds us to keep anticipating and creating our own wonderful Future. 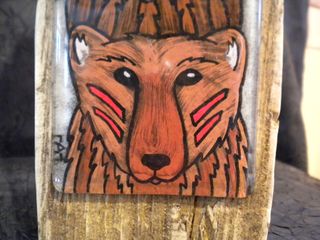 The Bear tells us to be Introspective - go within ourselves to experience the truth and to grow as a person.

What animals would be in your totem??

I have been mulling over the idea of animal totem poles done in glass for almost a year now.  I decided to start small, but have ideas for making them larger and larger as I work out what feel I like. 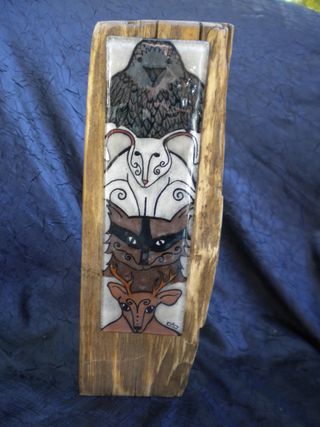 My first attempt is what I am calling the "Life and Love Totem"  It is about 14" tall and 4" wide overall, so a nice table/mantle piece.  I found a website called Wind Legends that has all kinds of animals listed with their "meanings".

For this totem, I chose to use a Crow for Integrity, Rabbit for Health, Racoon for Dexterity and a Deer for Love.   I have written, and plan to type out, a card for the totem describing what these animals represent and why they are important for our own introspection. 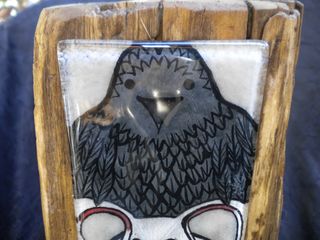 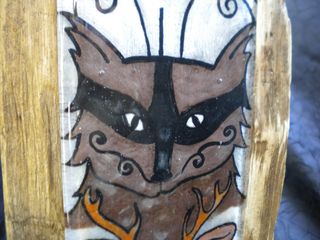 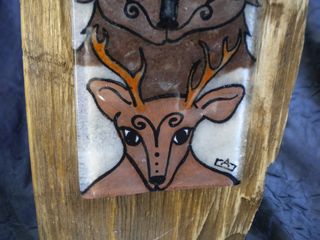 My favorite in this totem is the Rabbit.  I love the way the shapes formed and he is sitting so sweetly.  They were all really fun, though, and anyone who has seen the hand mirrors that I made in past years might recognize the style of the raccoon.  I think the recognizable, but whimsical style is perfectly suited to an animal totem that will hopefully bring someone the fortitude to uphold the values of each animal in their own life.

I've already got another totem going in the painting process.  This one will be a gift, though, so can't post about it until the recipient is duly surprised.  Check back in a week or so for more on that one.